. Stefanos Tsitsipas raised eyebrows with his comments at the Miami Open
. The world No 5 argued there would be more male winners in three-set matches
. The 23-year-old said he was told that women have more endurance than men
. Naomi Osaka jokingly threatened to extend his sets to nine if he affected hers

Tennis world No 5 Stefanos Tsitsipas has waded into the sport’s gender debate, claiming women should play five sets if they want equal pay.

The Greek star raised eyebrows with his comments at the Miami Open this week after he beat Alex De Minaur 6-4, 6-3 to progress to the last 16.

Tsitsipas said he had been told that women have better endurance than men so could therefore play five sets. 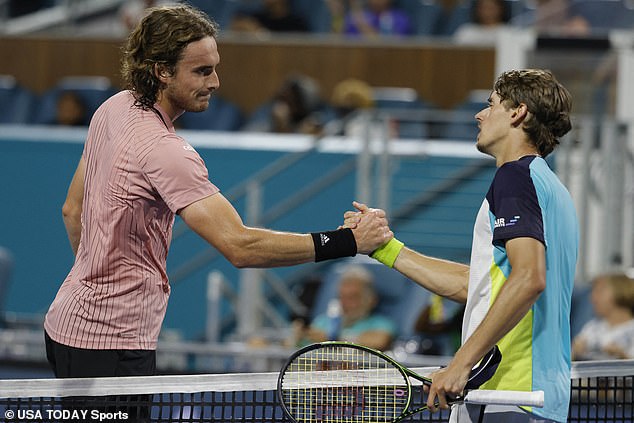 Tsitsipas made the comments after he beat Alex De Minaur (right) 6-4, 6-3 at the Miami Open

The 23-year-old also argued that there would be more variety among male Grand Slam winners if they played three sets.

He pointed out that he and world No 4 Alexander Zverev would be champions if the majors were best-out-of-three for men.

‘I don’t know. There are also a lot of scientists and statisticians, whatever, out there. I’ve been told that women have better endurance than men. I don’t know.

‘I’m pretty sure you can find a lot of cases where the loser of a Grand Slam won the third set or won the first two sets, still somehow found yourself losing at the end.

‘It’s different psychology. I’m sure it allows the greater players, the ones that have more experience when it comes to winning Grand Slam titles, on fighting back.

‘I like the best of five. I think it gets very physical. It makes for a great show, as well.’

Naomi Osaka responded to the controversial comments after powering past Alison Riske 6-3, 6-4 in the last 16, branding Tsitsipas a ‘funny’ guy. 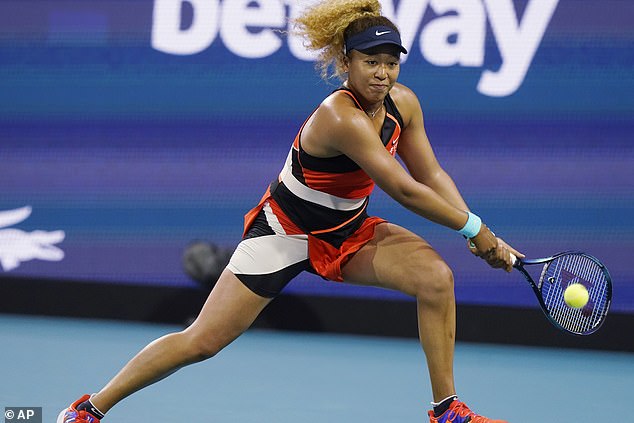 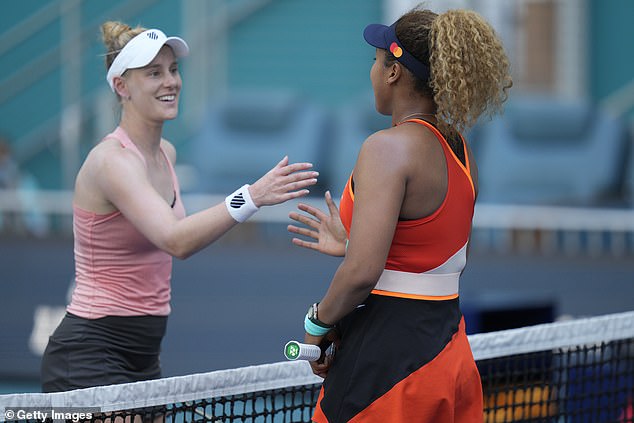 ‘Does he want to play nine sets? If he tries to extend mine, I’m going to extend his,’ Osaka said with a wry smile, via Eurosport.

‘This guy is so funny, man. I don’t know. I feel like that would change the structure of tennis. Like people will start doing things differently in the gym and stuff like that.

‘It will probably also take a very long time to be implemented, but also, a man is talking about a women’s sport, so I don’t think his idea is going to go through.

‘I don’t want to be rude. I’m really trying to structure this in a way that’s not like off-putting, but I think it’s like decades of hard work.

‘Up until now, women have been putting in the work. It’s not just like, oh, it’s come out of nowhere that you get paid the same.

‘The history of the WTA has been leading them into advocating for equal pay with Billie Jean King, Venus [Williams], Serena [Williams] all that. 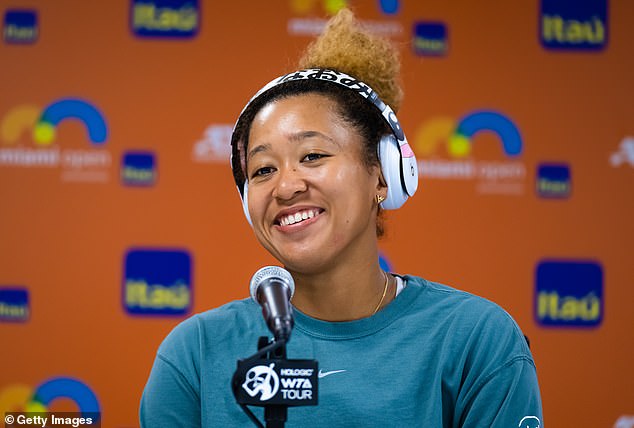 ‘I also think ticket sales are important. I think the WTA has really good up-and-comers, the No 1 player in the world, Iga [Swiatek], is like 20 right? I don’t know. It’s who people find interesting. Coco [Gauff] is amazing as well.

‘For me, I feel like the revenue that you generate, like ticket sales, is very important, and I think the WTA is doing a really good job at that.’

The Women’s Tennis Association attempted to introduce five-set matches for the WTA Finals between 1984 and 1998. But the WTA ultimately reverted back to three-setters.

Tsitsipas was knocked out of the Miami Open by Carlos Alcaraz 7-5, 6-3 in the last 16, while Osaka breezed through to the semi-finals, winning her quarter-final against Danielle Collins 6-2, 6-1.

The US Open was the first to offer equal prize money to men and women in 1973. The Australian Open joined in 1984, while the French Open followed in 2206 and finally Wimbledon in 2007, according to ESPN.