Tom Bower is spreading lies, made up conspiracies that he read on Twitter in his book; their friendship goes way back: Tennis fans react to rumors that Serena Williams denied being Meghan Markle’s friend

Social media has been abuzz over the last 24 hours with rumors about Serena Williams and Meghan Markle, where the former supposedly denied that she was Markle’s friend in a recent telephone interview. 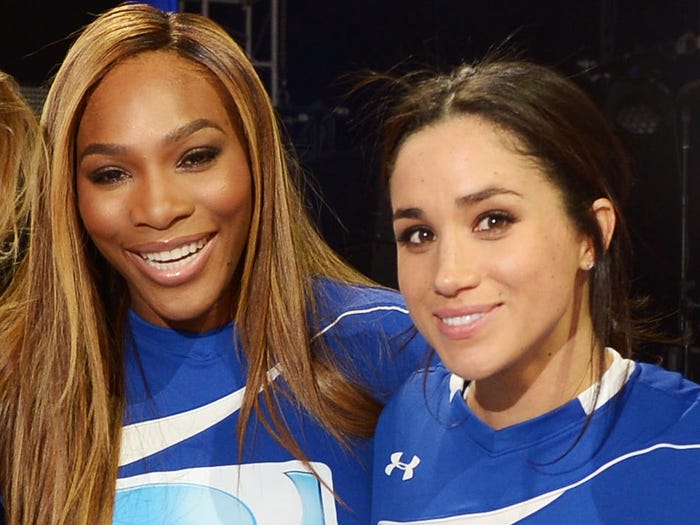 The remarks surfaced as excerpts from a biography written by British investigative journalist Tom Bower about Meghan Markle, titled ‘Revenge: Meghan, Harry and the war between the Windsors.’

The book is only scheduled to come out on July 21, but one of the leaked quotes portrays the 23-time Grand Slam champion as dismissive of her fellow American, suggesting that she should try to remain true to herself instead of spreading lies.

“You’ve got to be who you are, Meghan. You can’t hide,” Serena Williams said, according to Vanity Fair’s Sam Kushner, when he called to confirm whether Williams was friends with Markle.
Tennis fans, however, sided with the Duchess of Sussex, claiming that Bower was simply making up facts to discredit her. Users on Twitter recalled all the instances from the past where the 23-time Grand Slam champion has waxed lyrical about Markle, pointing out that there was more than enough proof of their friendship being legitimate.

Many were of the opinion that both Markle and the former World No. 1 should sue the writer for libel, and hoped others wouldn’t entertain such baseless accusations from someone who has a track record of subpar investigation.

In fact, Williams’ supposed comments chastising Markle are a word-for-word copy of a quote she had said about the American years ago, taken completely out of context.

In the original article by Vanity Fair, the 40-year-old was advising Markle on how to deal with paparazzi and media attention, suggesting that she shouldn’t try to hide her true self — a quote that makes more sense in that particular context. In light of that information, Bower’s story falls apart without question, but fans will have to wait until next week to see the full picture for themselves.

“Tom Bower is spreading lies, made up conspiracies that he read on Twitter in his book. Serena Williams and Meghan Markle’s friendship goes way back, years before she met Prince Harry,” one fan tweeted.

#TomBower is spreading lies, made up conspiracies that he did read on twitter in his book. #SerenaWilliams and #MeghanMarkle friendship goes way back, years before she met #princeHarry.

Serena Williams called Meghan Markle 'truly noble' after her tell-all interview — see inside their 7-year friendship
friends since 2014, though they met in 2010. Frequently at Williams tennis matches.https://t.co/4lUjuaZAj8
+
+

“They are squealing over some moldy royal biographer’s fanfiction turned book … stuff like Serena Williams denied being Meghan’s friend. Same Serena who threw Megs a baby shower. The usual lies these derangers lap up,” another user wrote.

They are squealing over some moldy royal biographer’s fanfiction turned book … stuff like Serena Williams denied being Meghan’s friend. Same Serena who threw Megs a baby shower. The usual lies these derangers lap up. 🤡Oh and Meghan coming to the UN. 😄

I used to call you Meghan (and I still do) but dear Duchess of Sussex your first project “Together” a cookbook bringing women of all cultures together. I could not be more excited about it and proud of you.
It’s beautiful – diversity, inclusivity, coming together in grief or joy pic.twitter.com/RkB2O35qmG

“I hope Serena Williams and Meghan sue the f**k out of Tom Bower, that little clout-chasing b***h,” one account posted.

Not only is #meghanmarkle “not friends” with Serena Williams, she’s not friends with Venus either 🤣🤣🤣🤣. #duchessofsussex #QueenMeghan pic.twitter.com/nNJb4Wp6RP

Ohh look, the non-friends, Serena Williams and Meghan, hanging out when she was pregnant with king archie. 🥴🥴🥴🥴🥴🥴🥴🥴. #duchessofsussex #QueenMeghan pic.twitter.com/o34bpcoWkd

“Royalist Karen headcanon: Meghan has zero friends and hangs out with a hologram of Serena Williams. It must be truth because look at that “gotcha Meghan” fanfiction by that Bower guy,” another fan sarcastically tweeted.

Royalist Karen headcanon: Meghan has zero friends and hangs out with a hologram of Serena Williams. It must be truth because look at that “gotcha Meghan” fanfiction by that Bower guy. #RoyalistKarenDelusions

TOM BOWER IS A LIAR.

Meghan never claimed Michelle Obama was he friend. Could you show the disclaimer from Michelle Obama.
If Serena Williams denied she was her friend, why did she host a baby shower for her, attend her wedding and a Polo match in England as her guest? She would be the one lying.