‘It’s unforgivable and a slap in the face for the Queen’: Thomas Markle launches blistering attack on Meghan and Harry on his YouTube channel after the pair shunned Prince Philip’s memorial service
Sussexes stayed at their California mansion during Westminster Abbey service
Prince Harry heavily criticised after refusing to travel after a row over security
Thomas said the decision was an insult to the Queen ‘and the British people’

Thomas Markle has launched a blistering attack on Meghan and Harry for shunning Prince Philip’s memorial service, calling the decision ‘unforgivable’ and a ‘slap in the face for the Queen’.

The Duke and Duchess of Sussex remained at their $14million mansion in Montecito while the rest of the Royal Family, including the Queen despite recent health issues, gathered in London for the poignant event last week.

Harry, who is due to travel to the Netherlands in a week to attend the Invictus Games, refused to travel over a row about his security.

The Duke, 37, is pursuing a legal challenge against the Home Office after being told he would no longer be given the ‘same degree’ of personal protective security when visiting from the US, even though he offered to pay for it himself.

However, Mr Markle – speaking on his YouTube channel – said there was ‘no excuse’ for missing the service in Westminster Abbey. 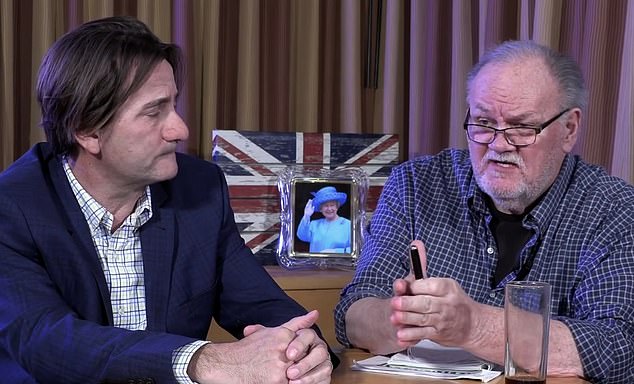 Attending and giving respect and giving God’s grace to Prince Philip for a lifetime of service was very important to the Queen, and for them to not show up was a slap in the face to the Queen,’ he said.

‘It was unforgivable. The British people won’t forgive them for that, and they shouldn’t.

I don’t know what the reason was, but there’s no excuse at all. It’s a slap in the face for the Queen and the British people.’

Harry’s failure to show up was also criticised by Richard Griffin, who spent 14 years as a royal protection officer for Prince Philip. 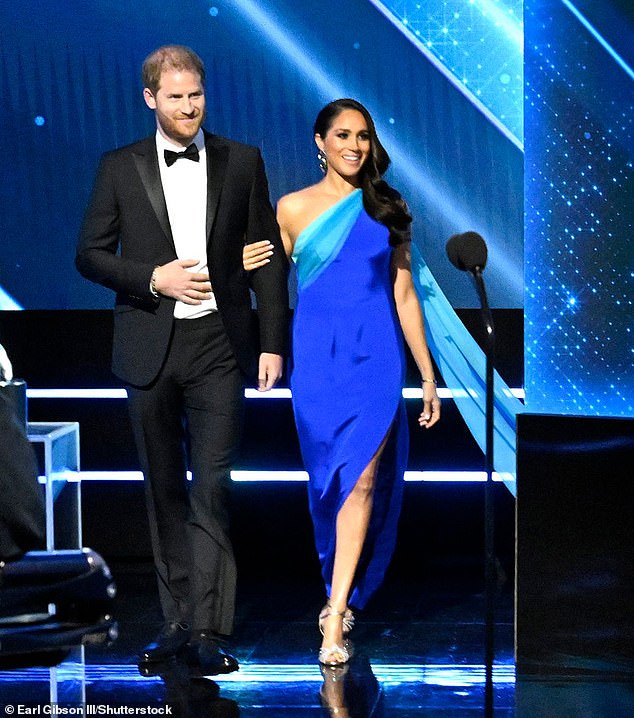 The Duke and Duchess of Sussex remained at their $14million mansion in Montecito while the rest of the Royal Family attended the service. They are pictured at an awards show in LA in February 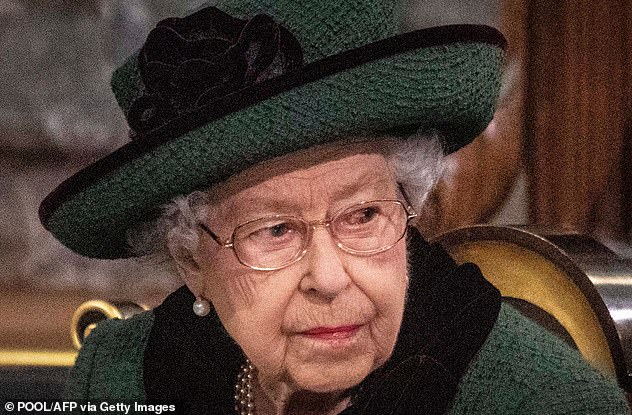 He said: ‘Prince Philip was their grandfather so William has obviously had a great training from him and is going to learn examples from him. I just hope Harry gets some of these things in his mind.

‘It [Harry not being here] was a big disappointment for everybody. People were talking about it. Certainly around where I was people were saying he should have been here.

‘All this nonsense about how he couldn’t get protection, as far as I’m concerned that was a pathetic excuse. He should’ve been here to honour his grandfather.

‘At the end of the day, if he was that worried about security, he could’ve stuck with his brother and father who have got wonderful security and he would have been more than safe.’

Harry last returned to the UK eight months ago to unveil the statue of his late mother Diana, Princess of Wales in London on July 1 with his brother Prince William. 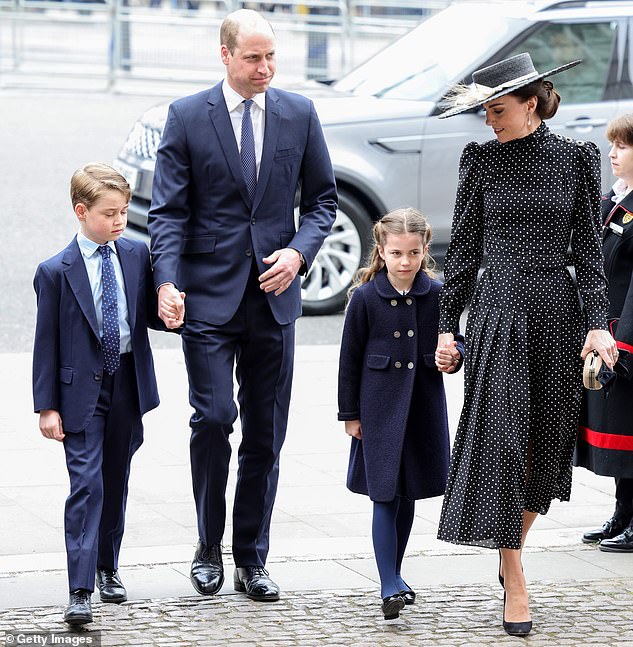 Prince George, Prince William, Princess Charlotte and Catherine, Duchess of Cambridge, at the service on March 29 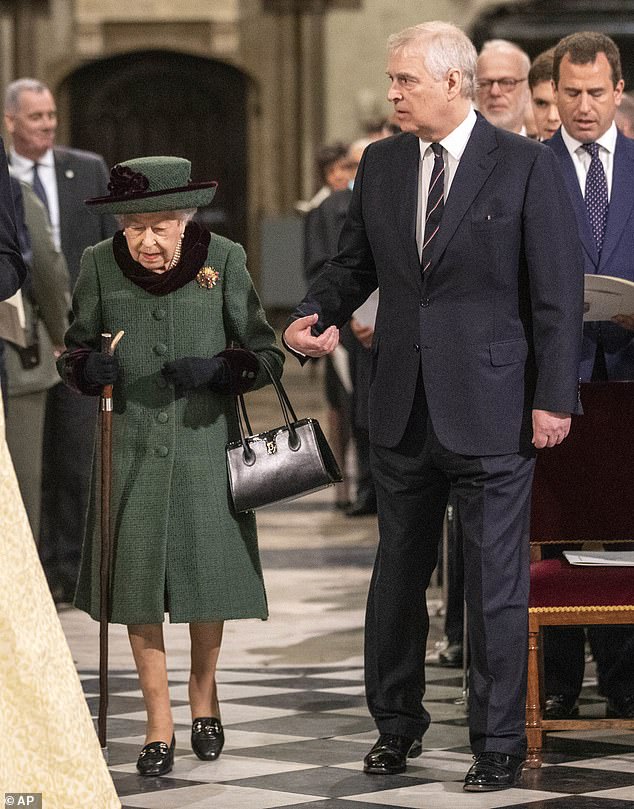 Prince Andrew controversially walked her mother down the aisle at Westminster Abbey. Pictured: He releases his mother from his arm as she walks the final steps to her seat unaided

However, he does plan to fly to The Hague in the Netherlands in two weeks’ time to attend the Invictus Games for injured military service that he set up.

The Games run from April 16 to 22, which means Harry would have the opportunity to visit his grandmother for her 96th birthday on the 21st.

On March 11, a spokesman for the Duke confirmed that he would not return to the UK for the service – but added that he hopes to visit his grandmother soon.

In April 2021, Harry flew back from California, without Meghan who was heavily pregnant at the time, to attend Philip’s funeral at St George’s Chapel in Windsor.

Her Majesty stood in Westminster Abbey where she had personally ensured her beloved husband’s final wishes were fulfilled after his Covid-hit funeral left her sat alone without the rousing hymns and guests he loved so much.

The 95-year-old monarch used a stick as she was walked to her seat by her disgraced son the Duke of York to give her ‘strength and stay’ Philip the send-off he wanted at a service attended by the Royal Family and his relatives, friends and people who benefitted from his charities. 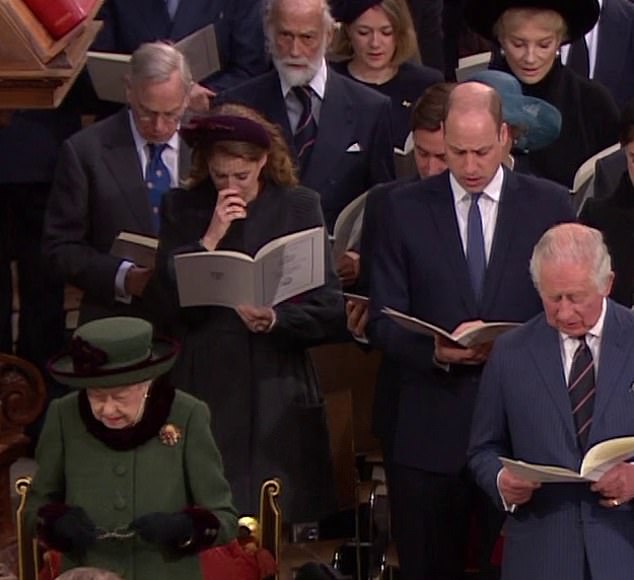 Despite battling mobility problems, she stood to pray and sing anthems during a 40-minute service that her husband of 73 years had helped plan for before his death last April.

But she chose Prince Andrew to support her as she arrived and left the church, clutching his elbow with one hand and a walking stick with the other.

The Queen had stood with tears in her eyes as the 1,800-strong congregation sang Guide Me O Thou Great Redeemer before the bells of Westminster Abbey rang out to mark the end of the memorial service for the Duke of Edinburgh.

After she leant on Andrew as she walked back out of the church, the Queen appeared to grimace as she walked to the car hunched over with the Duke of York at her side guiding her towards the Bentley.

She appeared to be holding tightly to her sticks and appeared to be making a great effort to get to the vehicle, concentrating very hard in taking each step. 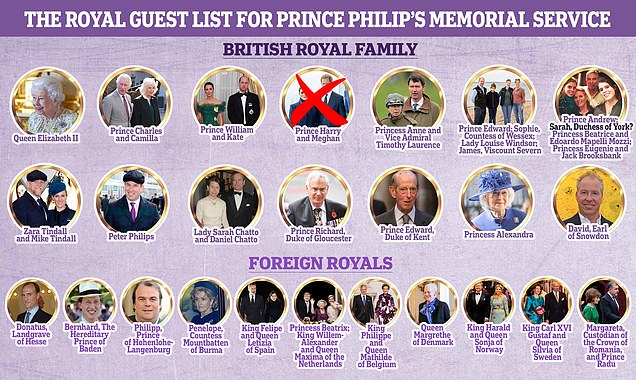 Once inside the car she appeared to be back to her normal composed self as the car slowly drove away. She waved to onlookers as she arrived and left the service.

Mr Markle launched his YouTube channel last month, and used his first video to accuse his daughter Meghan of lying about her half-sister, Samantha, and call the controversial book, Finding Freedom, ‘all lies’.

Samantha Markle, 57, is suing the Duchess of Sussex for defamation, and claims that Meghan made ‘false and malicious statements’ about her during her TV interview with Oprah Winfrey last year.

Royal expert Richard Fitzwilliams suggested the Sussexes would view Mr Markle’s latest move with ‘disdain’ but would nonetheless keep tabs on his activity.