WWE star Sasha Banks recently announced she’d be making her first public appearance since her and Naomi’s walkout from the company on May 16, and according to PWInsider’s Mike Johnson, the Chicago Comic and Entertainment Expo (C2E2) won’t be the only one. Johnson is reporting that Banks will also be attending at least one other wrestling convention this fall, and it’s expected to be announced within the next few weeks.

According to Fightful Select, Banks’ announced participation in C2E2 sprung several wrestling conventions to reach out, but Banks told them she wasn’t taking wrestling-related bookings until 2023. At this time it’s unclear whether this is due to personal preference, or if it’s related to her WWE contract.

WWE has neither confirmed nor denied the recent rumors of Banks being released from the company, with the former six-time women’s champion currently still listed as an active member of the roster on WWE’s official website. However, both Naomi and Banks have replaced previous references to the WWE on their Instagram accounts, referring to themselves simply as professional wrestlers, and PWI had previously reported that the pair had been removed from the internal roster.

Banks and Naomi walking out of “WWE Raw” has resulted in their apparent banishment from all things WWE and their suspension without pay while the situation plays out, and WWE creative is reportedly operating under the assumption that neither are returning. Unlike Banks, former WWE star Saraya, aka Paige, actually has been officially released, and said her goodbyes to the WWE via an article in the Player’s Tribune. According to the same PWInsider report, Saraya will be doing a signing at the Wrestling Universe store in Queens, New York on November 12 from 3 pm – 7 pm. Details for her signing can be viewed at TheWrestlingUniverse’s official website. 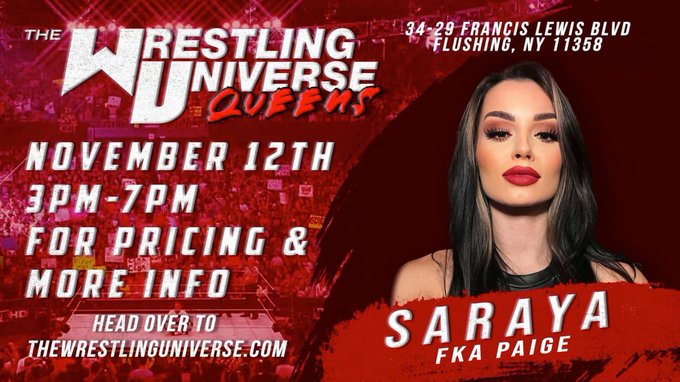