“I want to see how much I’m capable of, how talented I can be,” the Olympic great said in a new interview.

Simone Biles is not ruling out a return to the mat.

The Olympic great, 25, hinted that she may continue competing in professional gymnastics after famously withdrawing from several events at the Tokyo games last year.

“Technically, if you would ask anybody in the U.S. that looks at an American gymnast, I’m probably already aged out, but I really feel like leading up to Tokyo, I was hitting my prime,” Biles said in a recent interview with USA Today.

“Whenever I came back to the sport, I was like, there’s no way I’m going to get even better than I was because somebody told me that was the best I was going to get,” Biles said.

“You just have to push out those negative views and just keep pushing,” she continued. “I want to see how much I’m capable of, how talented I can be. And that’s why I came back, just to not have any regrets if I look back in 10 years. So now I can really say I have no regrets, but maybe I might push it a little bit more to see.”

Biles stunned her fans when she withdrew unexpectedly from multiple individual and all-around events at the Tokyo Olympics last year, explaining later that she was not in a good place mentally to continue competing.

Her withdrawal sparked a conversation about the importance of focusing on mental health in the world of elite sports.

Biles, who many consider to be the greatest gymnast of all time, says she faced pressure throughout her career to perform at the top of her game without always stopping to consider her own needs.

In withdrawing from the Tokyo Olympics, she set an inspiring example for many, sending the message that strength sometimes means stepping back and taking care of yourself.

“So it’s OK sometimes to even sit out the big competitions to focus on yourself, because it shows how strong of a competitor that you really are, rather than just battle through it,” she told NBC’s “TODAY” show in July.

She said she has been blown away by the support she has received following her withdrawal.

“Honestly, last year was a crazy year,” she said in the USA Today interview. “But I think pushing mental health to the forefront was a huge thing. I honestly didn’t realize in that moment the impact that it would have. … It still blows my mind to know that it wasn’t spoken about before as much as it is now, and we’re not open about it and people don’t perceive it the same way as an injury. So I’m happy that we had that conversation and we can now talk about it.”

Over the past year, it seems like Biles has had some time to reflect and find balance between her career and other aspects of her life. 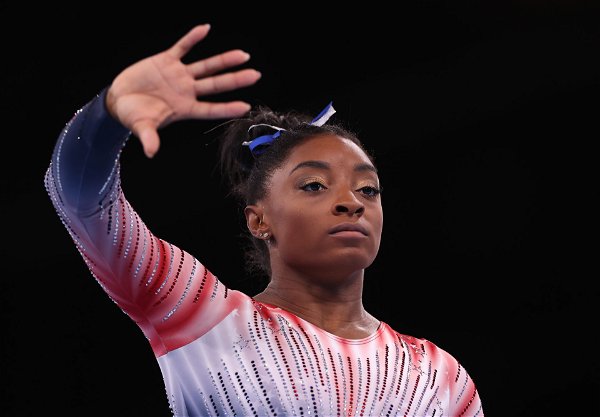 Last month, she announced her engagement to NFL player Jonathan Owens, and she recently shared that they will tie the knot sometime next year.

As for what else might be in her future along with a possible return to gymnastics, Biles said she wants to “be a mom one day.”

“I think kids would be amazing,” she said. “I think it’s one of the most amazing feelings in the world, what I’ve heard, but I do get that it becomes a job, and it’s hard. And I do work a lot, but I don’t think that will be a problem because I can take some time off. One day in the near future.”