RAFAEL NADAL is out for four to six weeks after picking up a rib injury in Indian Wells.

Rafael Nadal has been spotted training in the gym of his Rafa Nadal Academy after picking up a rib injury in Indian Wells. The world No 3 has started his season with a 20-1 win-loss record, picking up three titles, but will now be forced to miss the start of his most successful surface on the clay after revealing he had a stress fracture on one of his ribs

Nadal completed a career-best start to the season, winning his first 20 matches which included titles in Melbourne, Acapulco and a record 21st Grand Slam title at the Australian Open, all off the back of a six-month injury layoff. The world No 3 was the favourite to go on to extend his lead of Major titles to 22 at the upcoming French Open, where he is already a 13-time champion, but that looked under threat when he picked up an injury in Indian Wells.

During his 20th successive victory of the year in the semi-final agaisnt Carlos Alcaraz, the Spaniard called the trainer on court for what at the time appeared to be a pectoral injury. After losing the final to Taylor Fritz the following day, he flew home to Spain where he announced he had picked up a stress fracture during his semi-final victory and would be out for four to six weeks, meaning he would be forced to miss the first few clay tournaments in Monte Carlo and Barcelona.

With his preparation for the French Open set to by cut short by missing two tournaments in the lead-up, the likes of Mats Wilander had started to tip defending champion and world No 1 Novak Djokovic as the favourite to win in Paris over the 13-time champion but Nadal could now be fully fit in time for his most successful tournament after being spotted training a week after announcing his new injury. 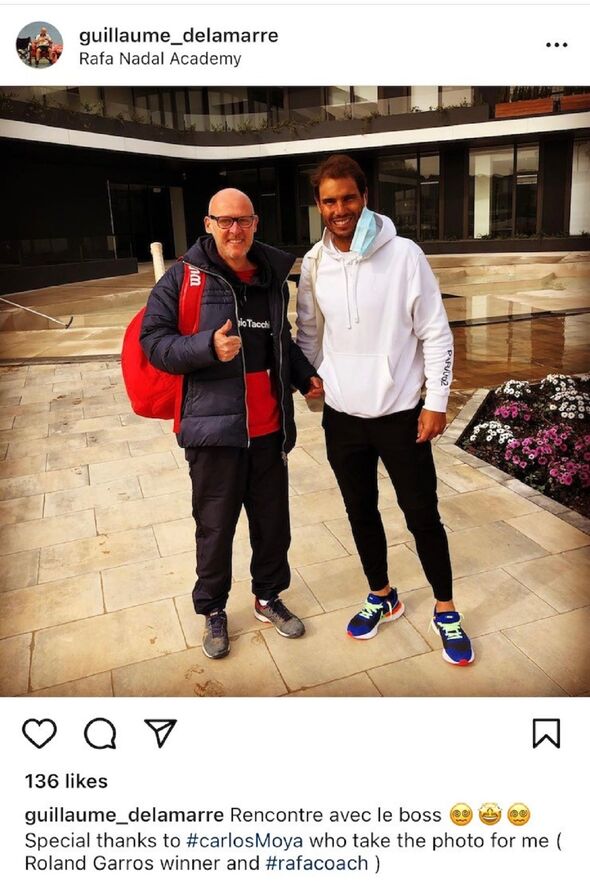 Rafael Nadal was spotted training at his Rafa Nadal Academy

A senior player on the ITF tour snapped photos of Nadal while visiting his Rafa Nadal Academy on Monday, showing the world No 3 back in the gym just seven days after confirming he would be out for four to six weeks. The 21-time Major champion could be seen using a leg machine in the gym of his Academy, and also snapped a photo with ITF pro Guillaume Delamarre outside on the grounds.

It comes after Nadal’s doctor admitted they were hoping to speed up the recovery process, though said four to six weeks was the most realistic time frame. “We’re going to adapt the work in function of the pain. For now, priority is to remove the pain. Once the pain’s removed we’ll be working as much as we can,” Dr Angel Ruiz Cotorro told RadiogacetaRNE recently. 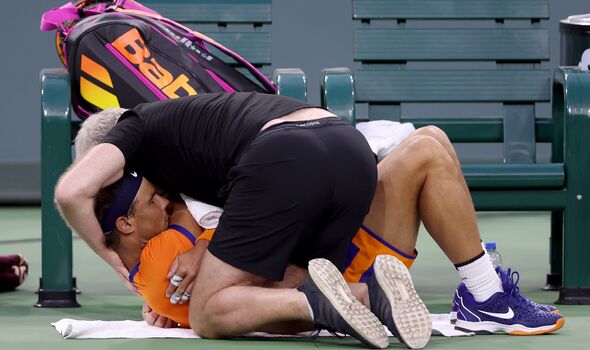 Rafael Nadal got injured during his Indian Wells semi-final

“With this in mind & the evolution it has, we’ll see if we can shorten the time, though 4-6 weeks is quite logical.” Announcing the news of his latest injury last week, Nadal said: “As it turns out, I have a stress crack in one of my ribs and will be out for 4-6 weeks. This is not good news and I did not expect this. I am sunk and sad because after the start of the season I have had such a good time.

“I reached a very important part of the year with very good feelings and good results. But hey, I’ve always had that fighting and overcoming spirit and what I will do is be patient and work hard after my recovery. Once again thank everyone for the support.”