Piers Morgan took on cancel culture and questioned what “red line” must be crossed in Ukraine for the United States to get involved in the war in a conversation with Martha MacCallum on “The Untold Story” podcast on Fox News Audio.

PIERS MORGAN: This cancel culture phenomenon, for want of a better phrase, has got to be canceled, and I see myself as leading the charge in the battle for free speech.

MARTHA MACCALLUM: I mean, it’s incredibly ignorant when you think about it, and it’s very self-indulgent. And I can’t help but think, and I’ve thought this in the early days of the war in Ukraine, “Well, there goes all that garbage.” You know, because when you see people struggling for their lives and you see a war underway, it makes all of that seem really trivial.

MORGAN: But I thought the same thing about the coronavirus pandemic. I thought that that would wake up the woke brigade, but it had the opposite effect. …

MACCALLUM: It intensified it.

MORGAN: The level of pointless virtue signaling, the level of attacks on free speech, the level of attacks on division of opinion was unprecedented and yet fueled by this crisis. So I wish I could share your optimism that even a war would concentrate people’s minds, that the spectacle of watching maternity hospitals in Ukraine being bombed, of women – pregnant women and children being blown to pieces – would somehow focus the minds of people about what is important in life, about giving them a new perspective. But I fear it won’t be the case, that actually the opposite will happen. They’ll use it to drum down that their views are the only acceptable ones, even while we’re watching a battle for freedom itself. 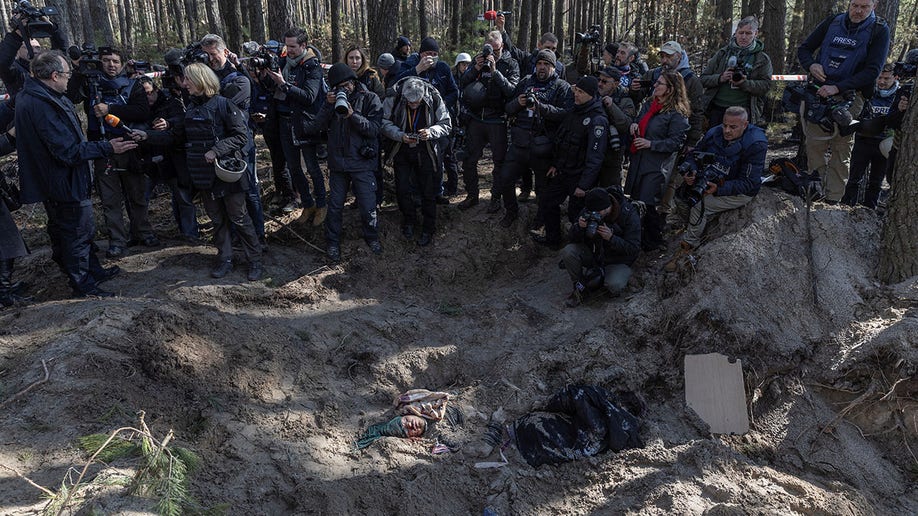 SENSITIVE MATERIAL. THIS IMAGE MAY OFFEND OR DISTURB The body of civilian woman Yaroslava 43, is covered with a blanket near a grave, according to residents Yaraslova was killed by Russian soldiers, amid Russia’s invasion of Ukraine, in the village of Motyzhyn, in the Kyiv region, Ukraine, April 4, 2022.

And we’ll see. I think this is going to go on for some time. I think this is a game-changing event that happens across Europe and has all kinds of implications. I thought it was interesting. President Zelenskyy was talking about Boris Johnson and saying that he felt that he’s been the most helpful leader in this environment. And Zelenskyy is clearly frustrated with the promises that have been made to him and the desperate situation that he finds himself in.

MORGAN: Well, my view about this Ukraine war is not a popular one. But I don’t understand really where our “red line” is on this.

If the red line is not actually maternity hospitals being bombed deliberately; if it’s not refugees being deliberately targeted as they try and flee a war-torn area; if it’s not lines of people, including Americans, as it turned out, queuing for bread because they’re starving, being shot at and killed; f it’s not Holocaust survivors being incinerated in their homes by Russian missiles, what is our moral red line? And why does it [need to] be different, really?

The morality of this is if he (Putin) invades a native country and if Putin does take over what he wants in Ukraine and then invades a native country because he’s factored in our fear of him and his threats of using his nuclear arsenal as a reason not to engage with him, why does that dynamic change when he invades a native country? All he’ll do, then, if he invades one of the Baltic Island countries, for example, all he has to say is, I’m going to nuke you if you do anything, and we’ve already blinked. We’ve already said, well, we’re not prepared to engage in that, in which point at which point I say, Well, then the nuclear mad option of mutually assured destruction disintegrates. This is one guy using his country’s nuclear arsenal to bully his way around the world, and at some point, you’ve got to stand up to him.

Bullies only understand one language. And I look at it, I think, is Vladimir Putin really going to kill himself by launching a nuclear strike? Why would he do that? Nothing about this guy’s mentality or history points to a bloke prepared to lose his own life. He’s a man who wants to grab other people’s land, grab other people’s money, enrich himself and make himself even more powerful. He’s not an Islamic fundamentalist who wants to commit suicide.

So if you look at it in totality, you think, at what point do we get involved? And I know all the arguments not to. But I also think we have a moral compulsion to do what Zelenskyy’s saying – to get engaged and to take on a dictator. Because frankly, I think if Twitter had been around in 1939, we wouldn’t have engaged with Adolf Hitler because people would have been too worried about the consequences.