Controversial Piers Morgan landed himself in hot water after declaring he refused to believe Meghan Markle’s claim that life in the Royal Family had left her suicidal – and he’s dubbed her “Princess Pinocchio” ever since. However he took exception to a damning article he read which called him out for allegedly portraying himself as a victim of racism – and he was quick to let his 7.9 million Twitter followers know how he felt.

The article, by Vanity Fair journalist Emily Kirkpatrick, blasted his claim he was “the real victim of ‘racist bullying” after his criticism of Meghan Markle.

The piece referenced a tweet Piers had posted, raging: “Can all the Meghan/Harry fans currently abusing me with stuff like ‘shut the f*** up white man’ please stop trying to silence my voice with racist bullying?”

However Piers hit back, reposting it with a personal response to the writer.

“Oh, I wasn’t a victim,” he told Emily adamantly. 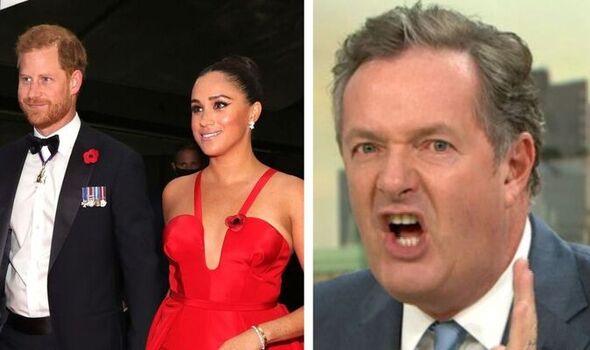 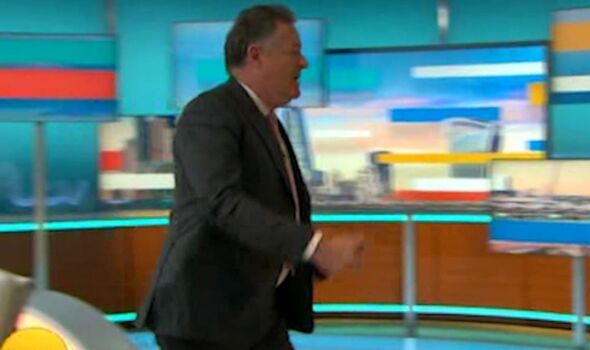 “I was just called a racist bully – and lost my job – for refusing to believe a proven liar bullying the Royal Family with fake racism smears.”

He added: “You seem to be trying the same tactic, which is a shame because I’m told you’re a talented writer.”

As the article stated, Piers had previously had an on-air debate with activist Dr. Mos-Shogbamimu, who had dismissed the Royal Family as “an institution rooted in colonialism, white supremacy, and racism”.

She had also criticised the Queen directly, asking of Piers: “What kind of grandmother would be so close to her grandson Harry, but then not use her power and influence as Queen to protect them from the racist media coverage? 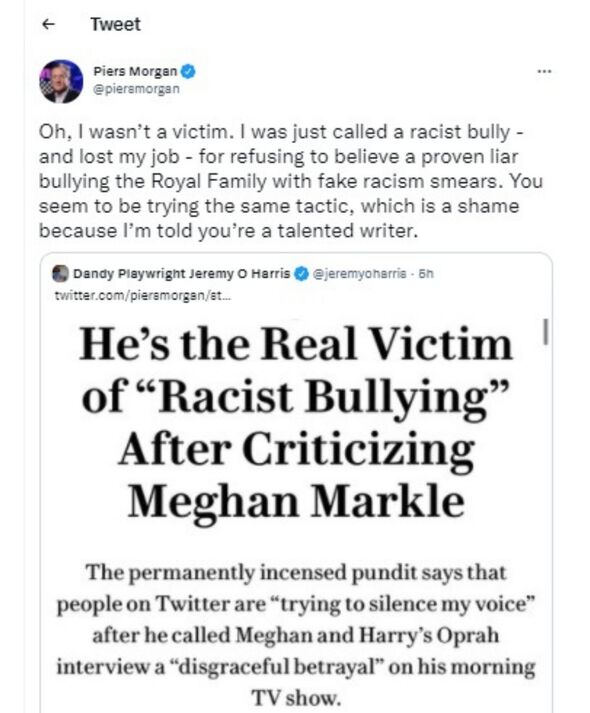 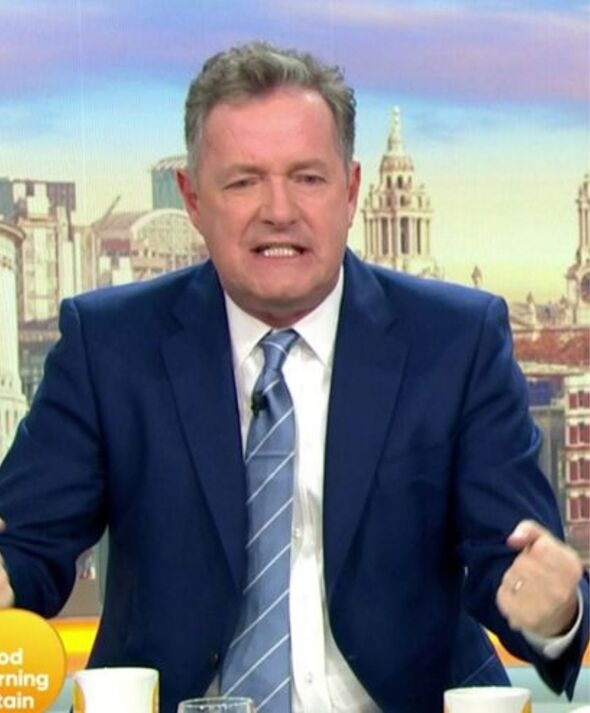 “What kind of grandmother would protect her own son, Prince Andrew, from the potential crime of raping a minor, but will do jack-all to protect Harry and Meghan?”

However Piers, for his part, has insisted: “I’m not a racist. I just don’t believe [Meghan].”

He added in an interview on Fox Nation’s Tucker Carlson Tonight that he found it “impossible” to believe that anyone would have been “that callous” to her if she had genuinely been suicidal.

“You’re accusing two people in the palace of being unspeakably cruel simply to protect the brand of the Royal family,” he mused.

“If that is true, let’s have the names of these people and ask them… ‘Did you tell a suicidal woman who told you she was suicidal she was not allowed to get help?’ Because I just find that impossible to believe.”

Piers has since announced his comeback on Talk TV with latest show Piers Morgan Uncensored.

He will be appearing every weekday evening to debate topics in the fields of politics and entertainment alike, with the latest topic being whether Boris Johnson should resign after 20 fines were issued over lockdown parties at Number 10 Downing Street.

“You did not lose your job, you stood up and walked out – it’s on TV FFS,” @Syn22 fired back, referencing a widely-viewed video clip of Piers storming out of the studio after refusing to apologise for his beliefs.

“Imagine any other worker in this land just walking out of their employment then claiming they got the sack,” he criticised.

Yet @sandyreese1608 replied: “Essentially, Piers was put in a difficult position and had no choice but to resign.”

Meanwhile @harrytraiter encouraged Piers that his comments were true, urging him to “never give up telling the truth on this vile couple!”

Finally @Rabs2013 had more serious matters on his mind, quizzing Piers: “Forget about this writer a bit, what is your plan on stopping Putin?”