‘DON’T UPSET MY WIFE’ I know why Will Smith slapped Chris Rock and I feel moved to defend him, says Piers Morgan

“This is going downhill fast,” I tweeted about the Oscars last night as it slumped into its habitual third hour tedium.

Minutes later, my tweet was proven spectacularly wrong, or possibly spectacularly right depending on your viewpoint, as furious Will Smith marched on stage and slapped Chris Rock in the face, before stomping back to his seat and hurling 4-letter abuse at him. 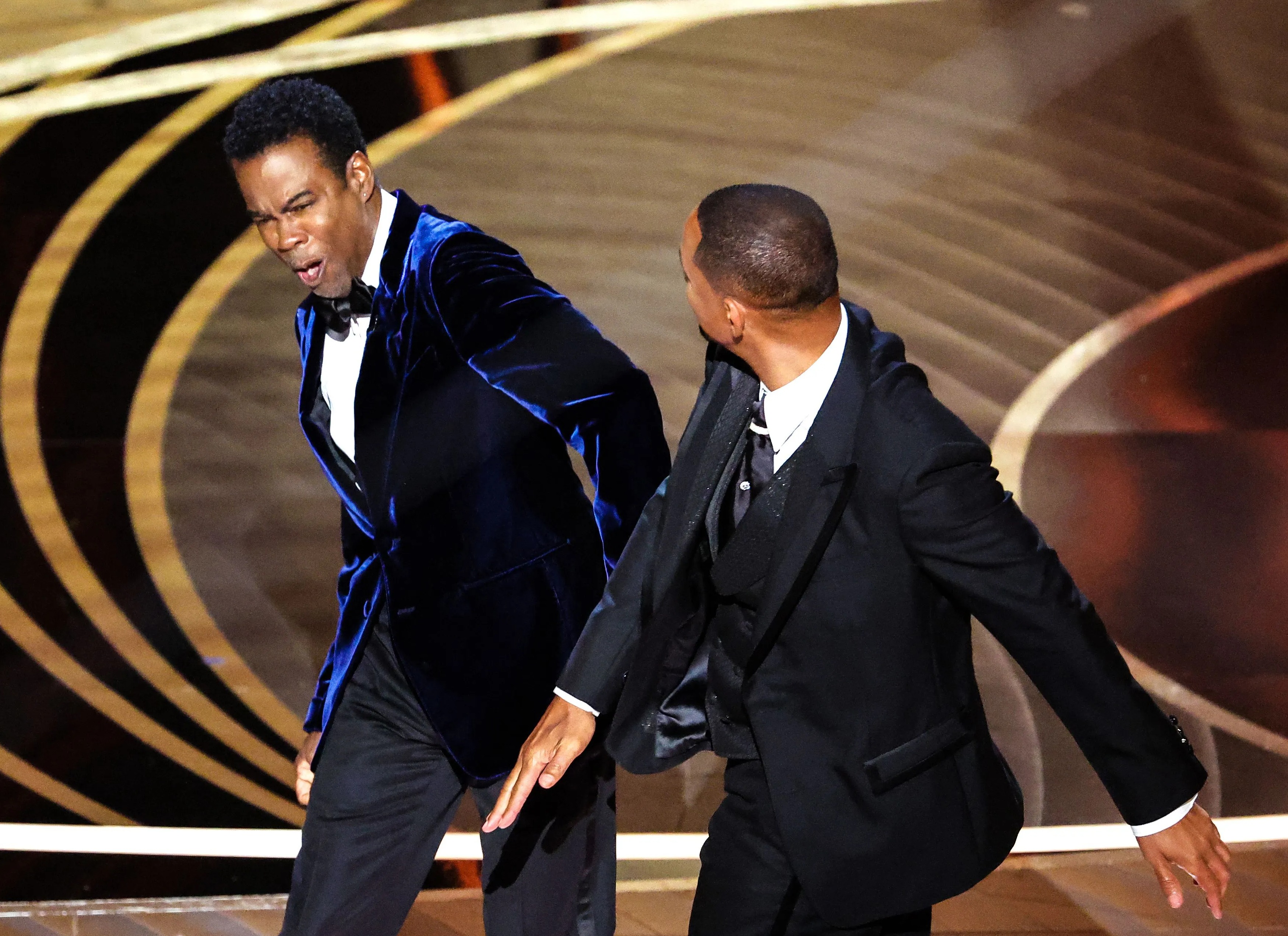 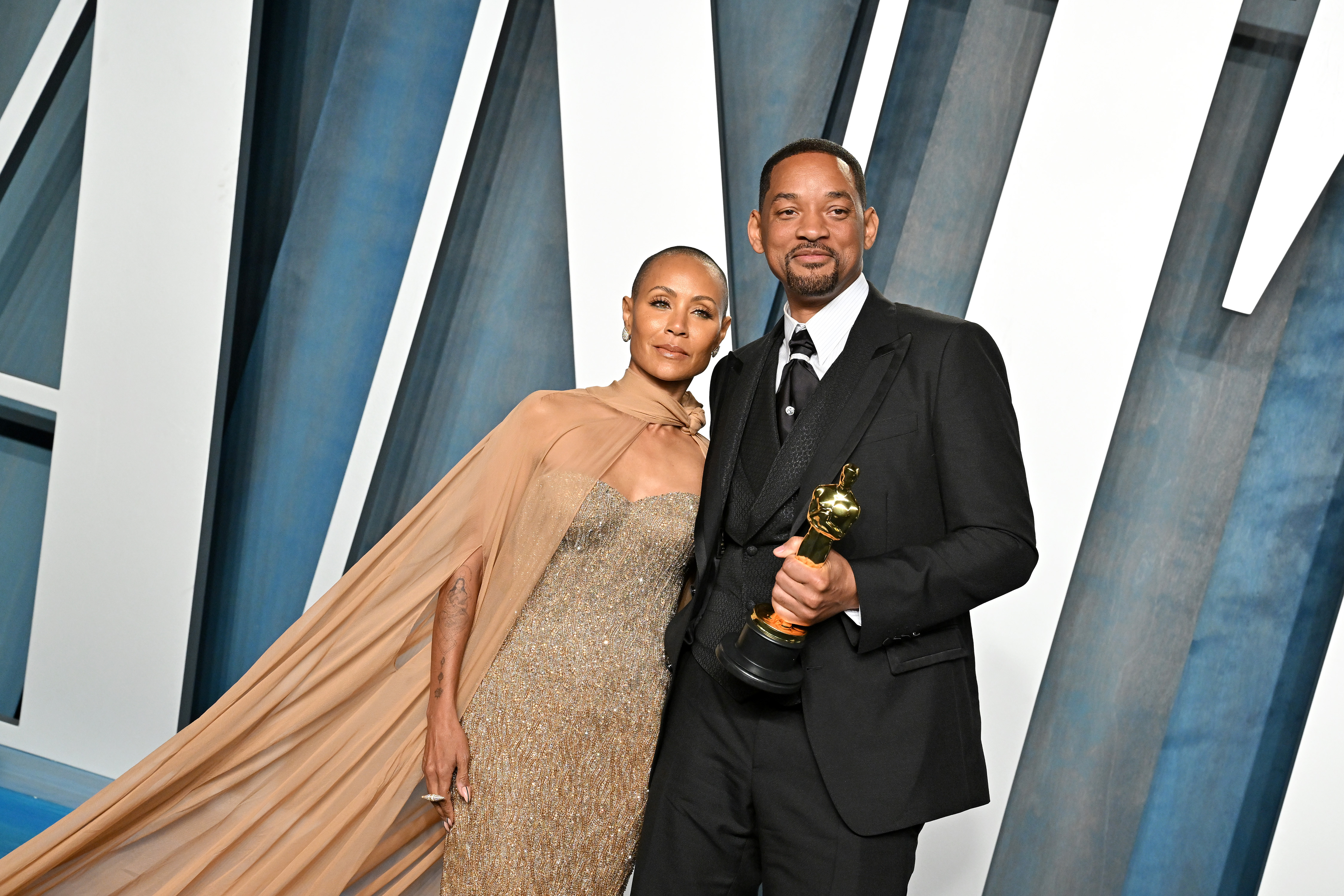 It was a shocking, stunning moment, without a doubt the ugliest ever seen at the Academy Awards in its 94-year history.

In fact, it was the single most outrageous thing I’ve ever witnessed at any awards show, and I was at the BRITS in 1998 when punk rockers Chumbawamba hurled a bucket of iced water over John Prescott, then Britain’s deputy prime minister, as he sat at a table near me with his wife.

Watching the Smith-Rock smack-down go down from a hotel room in New York, I could barely believe what I was seeing.

Like everyone, my first thought was it had to be a joke, some pre-rehearsed stunt the pair had cooked up to grab headlines and attention and promote the comedian’s tour and actor’s new movie.

But when the cameras cut to Smith’s enraged snarling face, it was suddenly very clear that he wasn’t kidding, and this was all very real.

Then raw footage – US broadcasters CBS had used their slight time delay to censor what was being said – from Japan and Australia TV feeds swiftly appeared on social media that showed Smith’s open hand hitting Rock hard in the face, prompting reeling Rock to exclaim “Wow, wow … Will Smith just smacked the s**t out of me!”, and then Smith twice screaming at him, “Keep my wife’s name out of your f**king mouth!”

And at that point, all hell broke loose.

The star-studded Dolby Theatre in Hollywood fell into a gob-smacked, open-mouthed excruciatingly uncomfortable virtual silence (Nicole Kidman looked like she’d just seen someone being eaten by a shark) and social media erupted into a raging inferno of fevered speculation.

Of course, the big burning question was why Smith reacted that way?

What drove one of the biggest movie stars of all time, and someone renowned for his cool, mild-mannered demeanour, to completely lose his mind on the biggest night of his career?

I know the answer.

A few years ago, I interviewed Jada Pinkett Smith for CNN, and Will turned up unannounced to support her.

My first encounter with him was unnerving.

“I wasn’t sure about YOU…. NOT SURE AT ALL!” he bellowed, standing just inches away from me, steely eyes lasered into mine for several long uncomfortable seconds.

Eventually, he grinned. “But now I like you. You know how you got me? It’s the way you say, ‘Blimey…'”

Will then began impersonating me in an outrageously over-the-top Pathé News-style English accent, before following us out into the studio to watch the interview from the shadows.

Before we started, he warned me: “Don’t upset my wife, Mr Morgan, you wouldn’t like me when I’m angry.”

I asked Jada why he was there. 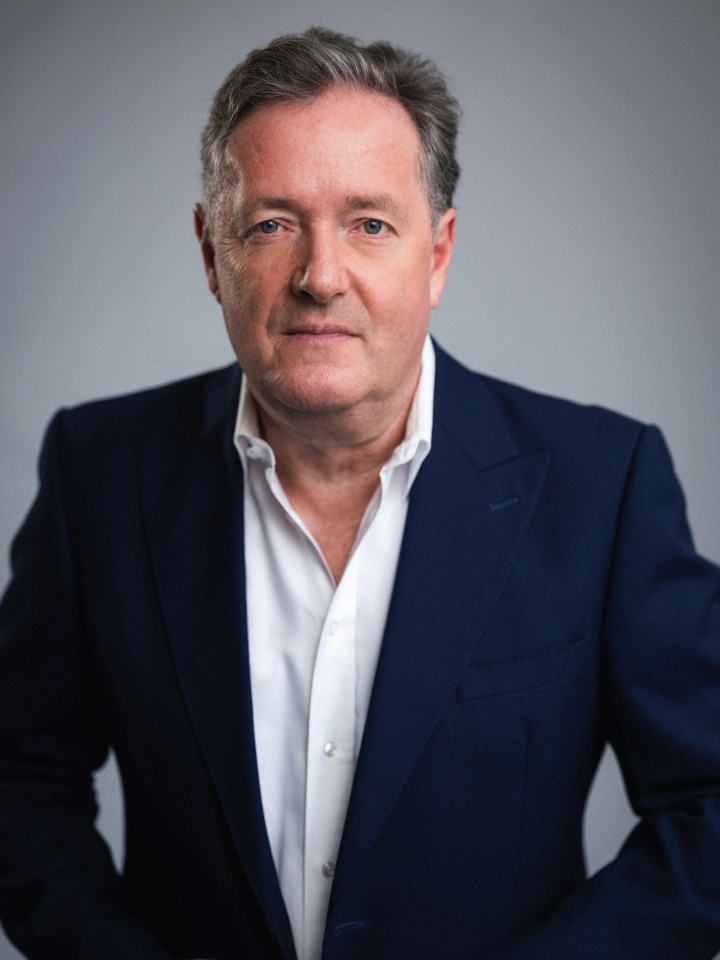 “He took two days off from Men In Black 3 to be with me and make sure I’m OK. He knows I’ve had a rough, rough schedule. And he was like, you know what, I’m going to take time off and take care of you. That’s love.”

“What made you fall in love with him?” I asked.

“Will came at a time in my life where he saw beauty in me that I didn’t see in myself, a diamond in the rough. And he picked me up and blew off all the dust and said, I’m going to make you shine, girl. I was going through a really rough time and he created a safe space for me to get healthy and to grow and define myself.”

At the time, I was also a judge on America’s Got Talent.

“Do you actually HAVE any talent?” asked Will, suspiciously, after the interview ended.

By chance, Barry Manilow’s piano was still in the studio from an interview earlier in the day, so I sat down at it and began playing Let It Be.

“When I find myself in times of trouble…” I crooned.

“Not bad…” Will admitted, jumping up on the piano and lying flat down.

“Speaking words of wisdom… let it be,” I cooed.

“Let it be”, Will sang too, looking quite emotional.

When I finished, we hugged.

And then he hugged a tearful Jada before they fist-bumped each other and recited a catchphrase from Smith’s Bad Boys franchise: “We ride together, we die together. Bad marriage for life.”

At which point, they fell about laughing.

I found it very touching.

And I thought of it again last night as the mayhem erupted at the Oscars.

‘A HARROWING EXPERIENCE FOR JADA’
What triggered Will Smith’s rage was Rock’s jibe, “Jada, I love you. GI Jane 2, can’t wait to see you.”

His wife has spoken very courageously and candidly about her 4-year battle with alopecia, the medical condition that causes people to lose their hair.

Jada admitted she found it “terrifying” when large clumps of her hair first began falling out in 2018.

“I was literally shaking with fear,” she said, “thinking oh my God, am I going bald?”

Then, in July 2021, she revealed she had shaved off all her remaining hair.

It was obviously a deeply personal and harrowing experience for her, as it would be for any woman.

So, when Chris Rock mocked her by comparing her appearance to Demi Moore’s shaven-haired character in GI Jane, it stung.

And when Will Smith, who’d initially laughed at Rock’s routine, saw how upset his wife was by the comment, it stung him too.

And he chose to defend her honour.

If he didn’t, then he’s an innocent victim and his punishment was ill-deserved.

‘IT WAS JUST A SLAP’
Comedians like him should be free to crack risqué jokes, especially about other privileged celebrities, without being smacked in the face.

But if Rock DID know, then it was a nasty, cruel quip that warranted a husband’s wrath.

(Full disclosure: when I was editor of the Daily Mirror, I once mercilessly lampooned a former editor of The Sun who had alopecia and I now regret that. For those who suffer from it, it’s a soul-crushing condition.)

And whilst I don’t condone violence, Will Smith didn’t punch him.

It was just a slap, that Rock shrugged off with good humour.

“That’s the only time you get hit by Muhammad Ali and it doesn’t leave a scratch,” he said afterwards, in reference to Smith playing the legendary boxer in a biopic of his life.

Rock’s been in much tougher scraps than this growing up in Brooklyn, New York, where he endured regular vicious racist beatings from white students at school.

And I suspect he now regrets making the joke given the obvious distress it caused to both Jada and Will.

If he doesn’t, then he should.

As for Will Smith, as the cancel culture mob race to destroy him, hysterically demanding he be stripped of his Best Actor award and charged with assault, I find myself moved to defend him.

He was standing up for his wife, the woman from whom he blew off the dust when she was going through a rough time, and said he was going to make shine, and created a safe space for her to get healthy and to grow and define herself.

In previous eras, he’d have been saluted for defending his girl, not savaged by an overly sensitive snowflake society.

And I say that as someone who was once punched in the head by Jeremy Clarkson at the British Press Awards in 2004 after publishing something embarrassing about his private life, and I have no problem with what he did.

Smith smiled in the audience after claiming his gong 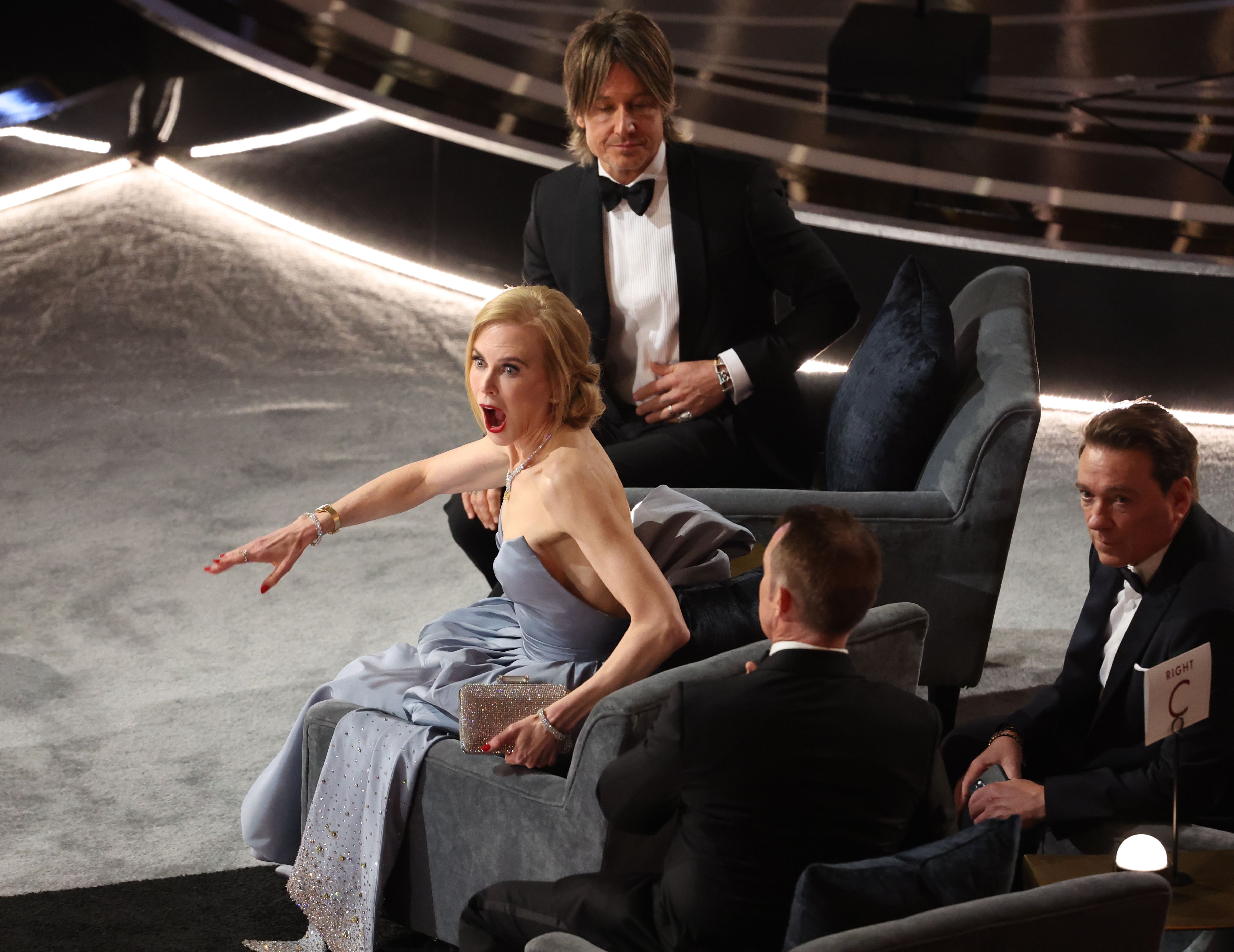