Nick Kyrgios demolished fellow Australian Alex de Minaur at the Canadian Open on Friday and immediately opened up about his heartbreak over his sad family situation back home. 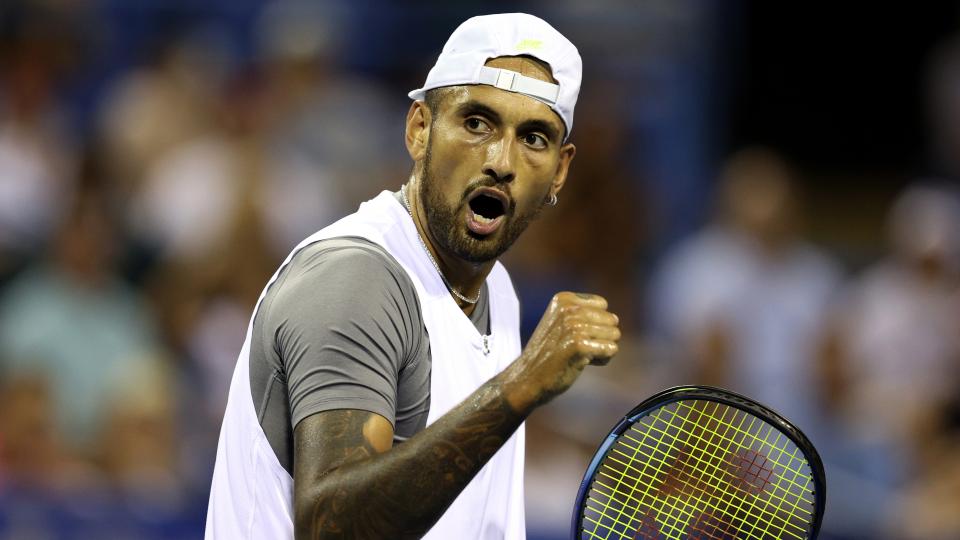 The Wimbledon runner-up, currently sitting at No.37 on the ATP rankings, put on a masterclass against de Minaur, winning in straight sets 6-2 6-3 and claiming victory in just 62 minutes.

Earlier this week the Canberran revealed that his mother and father are both in poor health – with his mother currently in hospital needing a kidney transplant.

‘I am missing home, I’m not going to lie,’ he said after the victory.

‘I haven’t seen my mum and dad in about three months. I’m missing them but at the same time I know I’ve only got a couple more tournaments before I go home.’

Earlier in the week after a momentous comeback win over Daniil Medvedev, the Aussie signed a stirring message to his sick mum on a TV camera, writing: ‘Be strong Ma’.

‘It’s hard because even travelling now, my mum is in hospital at the moment, my dad hasn’t been very well, my brother just had a baby and I don’t get to be there with my family when normal people would like to be with them,’ Kyrgios said.

‘It’s hard being from Australia because we can’t travel back and forth. There’s a lot of things people don’t see. They only see me winning, losing, throwing a racquet, doing those things. They don’t really understand the challenges that I face or what people on tour face, what’s going on in their personal lives.’

De Minaur entered the first-time showdown with his Davis Cup teammate as Australian No.1, but copped a nasty reality check in a 6-2 6-3 mauling at the hands of the hottest player on tour.

Kyrgios needed barely an hour to wrap up a 15th win from his past 16 matches and guarantee himself another important rankings boost ahead of the US Open starting on August 29.

Kyrgios claimed it was difficult playing his friend but, at times, it looked like he was toying with de Minaur, who barely won a point in the opening four games.

He finally got on the board in the fifth game but Kyrgios, mixing stylish serve-volley plays with ferocious back-court power, effortlessly took the opening set in 23 minutes before immediately grabbing an early break in the second.

He briefly lost composure after failing to serve out the match at 5-2 but regained his cool to clinch victory with a fourth ruthless fourth break.

Kyrgios said it was tough backing up from his emotion-charged second-round win over world No.1 Daniil Medvedev to keep his streak going.

‘It’s never easy playing a friend, particularly if they’re Australian. So I just got out here and got the job done,’ he said.

‘We’re such good friends, and he’s having such a good career so far carrying the Australian flag and it was just tough mentally.

‘I played the way I had to play. He’s a hell of a player. If you play to his strengths, he’s one of the best players from the back in the game and he’s so fast.’

The red-hot Wimbledon runner-up will rise from 37th to No.27 in the standings and could crack the world’s top 15 if he backs up last week’s success in Washington with an eighth career title on Sunday.

That would secure Kyrgios a crucial top-16 seeding in New York, ensuring the 27-year-old wouldn’t play a higher-ranked rival until at least the second week at the season’s final grand slam.

‘It was a goal more so that I didn’t get one of the titans or the big gods in the first round (at Flushing Meadows),’ Kyrgios said.

‘I can actually work my way into the draw if the draw’s kind. But, look, I always feel like my game is right there.

‘I feel like that no matter who I play – like today I felt amazing – and hopefully I can keep it going.’

Kyrgios’s more immediate focus is Hubert Hurkacz for a place in the semi-finals for a sixth tournament running outside of an injury-enforced withdrawal in Mallorca the week before Wimbledon.

Ruud is the highest seed left in the singles draw following the demise of the top three seeds – Daniil Medvedev, Carlos Alcaraz and Stefanos Tsitsipas – on Wednesday.