LORD ALAN SUGAR has confronted Piers Morgan after he claimed that the UK is “too scared” of Putin to act, amid Russia’s continued invasion of Ukraine.

The Apprentice star Lord Alan Sugar has hit back at Piers Morgan, 56, after the former Good Morning Britain presenter criticised authorities for doing “nothing” to stop the war in Ukraine. The business magnate, 75, responded after Piers shared a tweet from hybrid warfare expert, Liubov Tsybulska, on Saturday alongside a series of graphic pictures taken from Ukraine.

Liubov, who is an advisor to the Ukrainian government, posted a disturbing photograph of people lying under a blanket on top of tyres in the middle of a road.

She explained the horrifying scene in her caption, writing: “Naked women covered with a blanket on the roadside.

“Russian soldiers raped them and then tried to burn. Russians are expelled from Kyiv region and the whole world is witnessing their extreme inhuman cruelty.

“I’m not sure there are words to describe what they left after themselves,” the post ended. 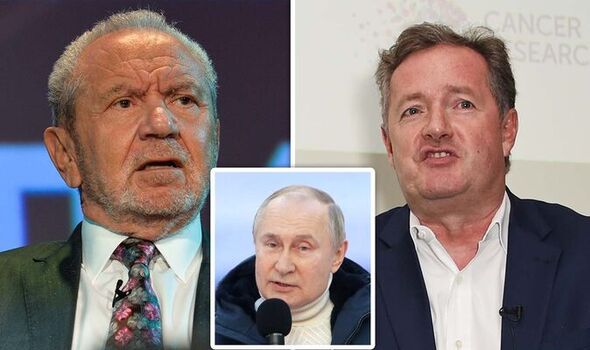 Lord Sugar hits back at Piers Morgan for saying ‘we’re too scared’ of Putin amid Ukraine war. 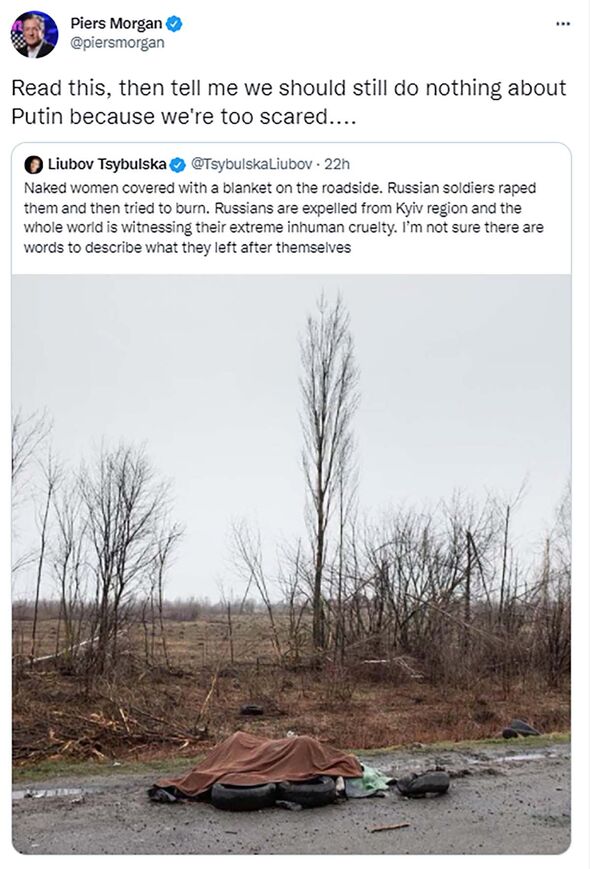 Piers, along with hundreds of users, were filled with horror after seeing the upsetting photograph.

He retweeted the image to his 7.9 million followers on Saturday and wrote: “Read this, then tell me we should still do nothing about Putin because we’re too scared.”

Piers’ tweet caught the attention of Lord Sugar and he demanded that Piers come up with some “suggestions” instead of simply pointing out we are doing “nothing”.

The Apprentice frontman said: “Once again I ask can you list what we should do. 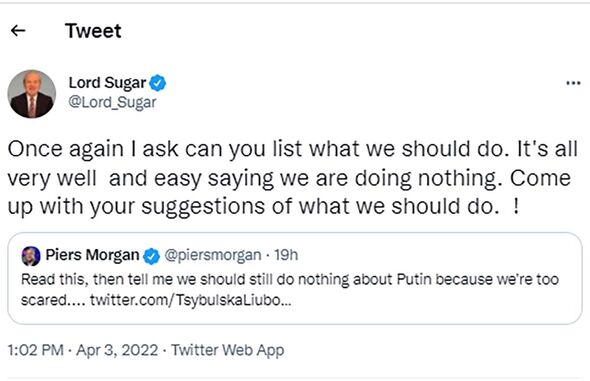 “It’s all very well and easy saying we are doing nothing.

“Come up with your suggestions of what we should do!”

Piers has not yet responded to Alan directly, but followed up with a separate tweet on Sunday in which he implored the West to “grow a pair”.

He raged: “What’s your red line, everyone?

“What more does Putin have to do before we (the West) grow a pair and take him on?

“Genuinely curious. All I keep reading on here is why we can’t possibly attack him to stop his evil genocide, and it sounds increasingly gutless and pathetic.”

There was a similar war of words last month when Lord Sugar slammed Piers’ opinions on the Russian invasion.

The businessman called on Piers to do more than “crow” over the crisis and come up with some “solutions” instead.

Piers had angrily said: “How can we ignore this? The world must stand up to Putin, and we need leaders with the guts to do it.”

Alan then retaliated in view of his 5.2 million followers at the time: “And do what? Give the solution.

“You can’t keep crowing without giving the solution.”

Piers subsequently hit back: “NATO is the greatest collective military power in the history of Planet Earth. We should use it. Now.”