Bianca Belair is the self-proclaimed EST of WWE—the strongEST, the fastEST, the toughEST and the all-around bEST superstar.

The journey to the WWE and its main roster certainly hasn’t been the easiEST for Belair, a former All-American and All-SEC track and field star at the University of Tennessee who battled binge eating disorder, bulimia, depression, and even a suicide attempt during her sophomore year at Texas A&M.

Belair took up CrossFit and powerlifting following graduation, but an injury and slipping rib syndrome diagnosis put an end to those aspirations.

“(After college) I spent a couple of years trying to figure out what I wanted to do,” says Belair, who stars in a new campaign for Snickers, presenting partner of WrestleMania 38. “I knew I missed that competitive atmosphere, but didn’t know exactly what I wanted to do or exactly how to get there or what pathway to take, and I didn’t have the resources readily available to me there.”

It wasn’t until WWE Hall of Famer Mark Henry DMed her after watching her CrossFit clips online saying he could get her a tryout, but that she would have to do the rest of the work. 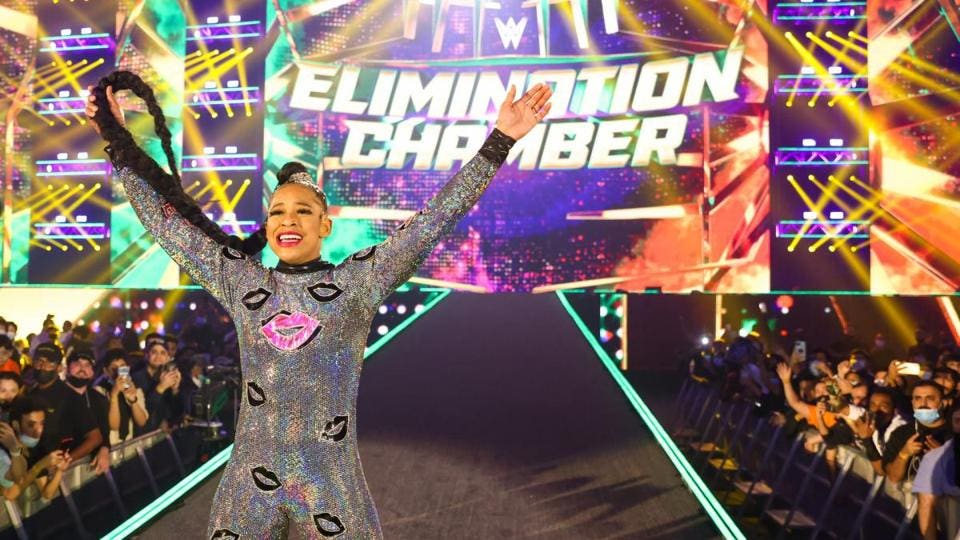 As someone who lives by an always-ready mentality, Belair was prepared for that life-changing opportunity, and every one that has come since. On Saturday, Belair faces Becky Lynch for the Raw Women’s Championship at WrestleMania 38 at AT&T Stadium in Dallas.

“It’s definitely a pinch-me-is-this really-happening-so-quickly moment, but it also makes sense because I do work very hard,” she says. “I’m a firm believer in don’t just work hard when the opportunity presents itself, you work hard all the time, year round. My motto is ‘Stay ready so I don’t have to get ready,’ because in WWE opportunities come up very quickly and you have to capitalize on them.

After a pair of official tryouts, Belair signed with WWE on April 12, 2016—three days after her birthday. She made her in-ring debut in September and her NXT television debut the following May. After multiple championship opportunities and a year-long undefeated streak while honing her craft in WWE’s developmental brand, Belair made her main-roster debut on April 5, 2020, the night after WrestleMania 36.

Belair has been waiting since SummerSlam in August for a shot at redemption at Lynch, who capped her triumphant return to WWE after welcoming her first child by defeating the title holder in 26 seconds. Lynch told Belair she had to go to the back of the line before getting another opportunity, but Belair was ready and eventually went on to win the Elimination Chamber match and another chance to get her hands on Lynch—and her hair.

“I worked my way back to the top and here we are now,” she says. “She’s been pulling every trick out of the book ever since to try to get to me mentally and physically—literally tried to break my throat to take me out of WrestleMania to cutting my hair. To go through that whole journey and have to scratch and claw to keep myself in the game has been tough. Now we’re finally here and past all of the antics. Now I’m just here to get my redemption against her Saturday night.”

Nearly two years to the day since her main roster call up, Belair has another opportunity to further her legacy in WWE as one of the all-time bEST.

“It might take 26 seconds. It might take 26 minutes,” she says. “It doesn’t matter how long it takes, it’s going to end with the same result: that’s Bianca Belair walking out of night one of WrestleMania 38 as Raw Women’s Champion.”